This prompt was such a fun one to work on. I love the way it came out, for the most part. However, there are a couple of changes that need to be made in order for it to look the way I want it to, but I’ll figure that out at a later time. 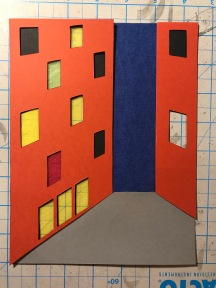 The next step was to draw the graffiti art, which in this case would be an octopus. I used the main building as a reference and retraced it on a blue piece of maker, making sure to add where the windows would be too. I had to draw the window shapes to make sure I drew the octopus the best way possible, so that most of its body would not be cut out. This technique worked out great.

I then proceeded to color the buildings and color the octopus with markers and colored pencils. Once they looked the way I wanted them to look, I glued down the octopus.

The final steps consisted of coloring the sidewalk, gluing down the building walls, making two small buildings and gluing them to the exposed sky area, and I also made little shadows for some of the windows. And finally, I added a moon to the sky and pierced in little holes to create the illusion of stars.

I am so pleased with the way its coming along. The only thing I’m not pleased about is the way the light photographs. It is a lot brighter in the pictures than how it looks in real life. I prefer the more subdued look (i.e. the way it looks in person). I’ll have to figure something out.

Do you feel completely confident in the way you photograph your art?