This week I managed to complete two of my light boxes. I find this part really exciting because I never really know what the end result will be until they are actually done.

I also started working on two new projects, but both of them are in the very beginning stages. I will most likely begin work on another light box as well. I’m trying to cram in as much work, because once the baby comes (I’m due in six weeks) I won’t have much time to do anything.

Keep reading to learn more about the finished and new projects below.

END_OF_DOCUMENT_TOKEN_TO_BE_REPLACED

Little Miguel came from a family of pirates. He knew since he was a tiny baby that he was destined to be a pirate too and he would one day go explore Mermaid Land.

Mermaid Land was a mystical land that claimed the lives of many. Most people who dared go, were never to be heard of again. But many brave individuals still kept going, because whomever captured a mermaid and proved their existence, was destined for fame and wealth.

Miguel did not care for either fame or wealth. More than anything, Miguel wanted to go there and find his father and older sister who had disappeared on their journey to Mermaid Land only a year ago.

Against his mother’s wishes, he managed to escape one night and set sail on his tiny sailboat.

But things did not go as planned.

END_OF_DOCUMENT_TOKEN_TO_BE_REPLACED 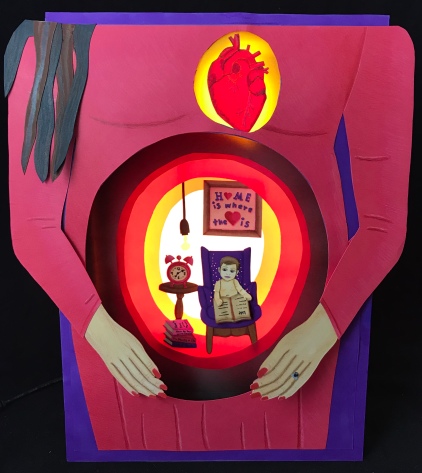 Sebastián lived in a home that was . . .

Just the way he loved it.

But life took an unexpected turn when he was forced to evacuate and move in with his roommates known as Mom, Dad, and Charlie, the cat.

END_OF_DOCUMENT_TOKEN_TO_BE_REPLACED

After completing the April Art Challenge, I realized how much I enjoy participating in different challenges and contests.

The best part of participating is the large amount of growth I see in my work in just a matter of weeks. By forcing myself to create more in a shorter time span, I am faced with lots of roadblocks that I have to tackle in order to complete the challenges. These roadblocks ultimately lead me to find solutions to problems I had previously avoided and that leads to growth and a greater understanding of what I can achieve with paper art.

Below are some challenges that I am participating in for the month of May.

END_OF_DOCUMENT_TOKEN_TO_BE_REPLACED

After having her 15 minutes of fame, Amelia was over the moon. She was finally where she belonged. She had always known she was a star and better than everyone else.

But, as it happens, people soon lost interest. It didn’t help that she was talentless and rude.

The movie roles stopped coming. She was dead broke, so, she did what all B-Movie Stars do, she caved in and stared in a low budget horror film.

END_OF_DOCUMENT_TOKEN_TO_BE_REPLACED

Growing up, Ofelia was always reminded of just how different she was. It wasn’t her fault that her eyes were different colors, that she had a slightly green tint to her skin, or that her head was too big for her body.
She learned, at an early age, to isolate herself and rely on art as her friend and companion.

Life was as good as it could get for Ofelia, but that all changed. When children started disappearing in her village, everyone automatically assumed it was her. People claimed they had seen little kids running around her home. Little did they know that they were paper people she had created so that she wouldn’t be so lonely.

END_OF_DOCUMENT_TOKEN_TO_BE_REPLACED

Poor little Diego. Being the smallest boy in Middle School was tough enough, especially when since he was kind of a jerk. But being the new kid made matters even worse. Nonetheless, he was determined to fit in. It was his right after all.

When the popular boys invited him to join their group, he said yes instantly, without really paying attention to what he had to do to join them.

END_OF_DOCUMENT_TOKEN_TO_BE_REPLACED

Valentina and Emilia were not your ordinary 7-year-old twins. They were quite different.

It started off innocently enough, with them tearing apart their dolls and giving them extra heads, just like them.

But that got boring fast.

END_OF_DOCUMENT_TOKEN_TO_BE_REPLACED

Don’t be fooled by the Queen’s youthful and somewhat innocent appearance. A few years back, at the age of 87, she made a terrible pact with the devil. He would restore her youth, health and beauty in exchange for her soul. She agreed instantly, before realizing that the secret ingredient to being young again was eating the hearts of her dead relatives.