Growing up, Ofelia was always reminded of just how different she was. It wasn’t her fault that her eyes were different colors, that she had a slightly green tint to her skin, or that her head was too big for her body.
She learned, at an early age, to isolate herself and rely on art as her friend and companion.

Life was as good as it could get for Ofelia, but that all changed. When children started disappearing in her village, everyone automatically assumed it was her. People claimed they had seen little kids running around her home. Little did they know that they were paper people she had created so that she wouldn’t be so lonely.

The village decided it was time to get their kids back, so they lured Ofelia out of her home and gouged out one of her eyes, thinking that they had removed her powers. They soon discovered that there were no children in sight and that Ofelia was innocent.

Ofelia was left to fend for herself, without even the slightest apology from anyone. She had never been a vengeful person, but they had taken one of her most precious possessions, half of her sight. She used the voodoo she had learned and exacted her revenge on the village – causing a week of complete chaos and destruction. She also cast a spell so that she could watch all of it unfold through the moon.

Now she lives happily in the village on her own. Only her paper friends remain along with the shrunken heads of some of the villagers. Life couldn’t be better.

As for the children, it turns out that the man who gouged out Ofelia’s eye was the one responsible for taking all the kids – no one ever found out what he did with the bodies.

Click on the links to view the blogs for the prompts.

This light box came out even better than I had envisioned. I love all the colors and the little sections of light.

I do think that I did need something to make the scene in the window more muted. I tried adding clear transparent paper, but it muted everything too much. Perhaps adding clear paper to the back of the window (i.e. behind the scene), that might have made it more muted, but not so much that the scene would get lost.

I also love the way the story unfolded and I think this particular piece displayed the huge difference from my first paper art attempt to what I am able to make now. I’m excited to see how my future light boxes look. 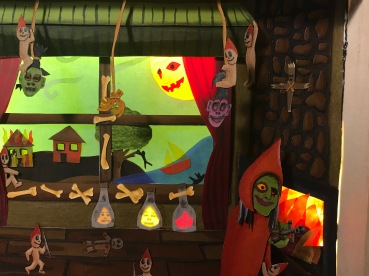 What type of light boxes would you like to see from me?