For day two of the April Art Challenge, we had to work on a skeleton. I decided I wanted my skeleton to be a silly looking skeleton that thinks he is a smooth talker. I looked up at references of skeletons. Even though I’ve drawn my share of skeletons, I forget the exact formation of the body, so references are always a good idea in my opinion.

I began by making a rough sketch of the size and look of the skeleton. I always make sure to draw my illustrations in the opposite direction, since I will be using the sketches as reference, or even those same sketches on the final piece, so I want the correct side not to have markings all over it. For this particular sketch, I did not draw the right arm, since I wanted it to overlap the body, and I knew I would be using this sketch in my piece.

Once I sketched out the skeleton, I then cut it out with a craft knife. I try to be as close to the design as possible. But once I’ve cut the entire piece, I’ll trim off edges that seem odd, or are too big, or not rounded enough, or too rounded, etc.

The next step is to separate the pieces, to give the piece a bit more dimension. In this case, I separated the arms, the hips, the head, and the legs. Many times I’ll redraw and cut new pieces with a bit of extra paper on the edges where they will be connecting to the main piece, so that I have more surface area to glue down. In this case, I realized I could use the same pieces and make the skeleton a bit shorter, which would be more in line with the look I was going for. 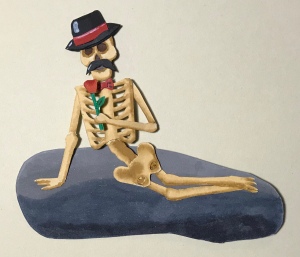 Lastly, I glued the skeleton pieces together. I made some props, like a bow tie, a hat, a rose, a mustache, and a rock where he would be sitting. Before gluing on the props, I colored in, using markers, the skeleton and the props to give them more dimensionality. Then I glued everything together. To give his eyes, nose, and mouth a glow, once the piece is placed in the light box, I glued brown transparent paper to the back of his head.

I also worked on some skeleton parts that will also go in the main piece. Those were simple and they didn’t really have to be too proportionate or nice and neat. Once I’ve created the backdrop for the main piece, I will glue them down together.

Do you have a specific set of steps you use when creating art?