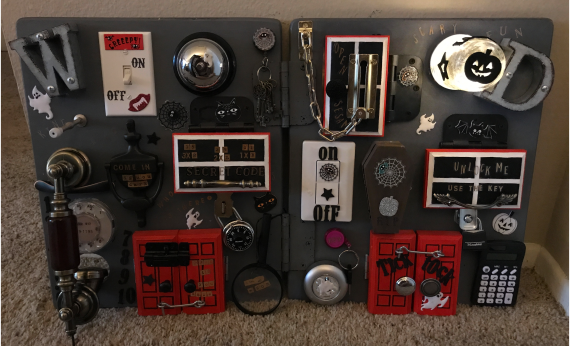 When I had my son, Sebastián, over a-year-and-a-half ago now, like many parents, I decided I wanted him to have toys that would stimulate him intellectually. I wanted toys that were imaginative and ideal for a curious baby. While doing research, I stumbled upon these wonderfully inventive toys known as busy boards.

There were quite a few busy boards being sold. Some with zippers or locks, others with different textiles for little chubby hands to touch, all with the intent of helping kids work on their fine motor skills. They looked absolutely amazing. I had to get my hands on one of them, that is, until I saw the price tag for the ones I loved – they were over $100. I couldn’t see myself spending that kind of money on something I could make myself, and make in the style that I like, with personalized messages and images for my son.

I was so excited to get started on the project. I began by doing research and looking at other busy boards out there in the market, as well as DIY projects other parents and grandparents had made for their little ones. I wrote down ideas of things I liked and wanted to implement into the busy board for my son. I knew I wanted a lot of little doors and different types of locks.

The next step was to think of a theme and color scheme. Right away I knew it had to be Halloween themed. I can’t help myself. 🙂 I decided the main colors I would go with were grey, black, white and red.

I arranged everything on the board, to make sure it would all fit. Once I saw where I would be placing everything, I began by attaching the two wooden cutting boards I bought to use as my base (they are heavy and very sturdy). I attached them by using door hinges. Then I painted everything that needed to be painted (the base, the little doors and windows, and the coffin).

As I went along, I changed my mind a bit, about where I wanted things. It took a really long time to drill the holes for the light and for the phone (our drill is really old, so the battery would die every 10 minutes or so).

Below is the final result with the light off. The light switch on the right side actually controls the light, I found a wall/switch light control remote with an outlet receiver on Amazon (before working on this project, I had no clue these awesome inventions existed).

For the right side I added a metal W (for his hyphenated last name – I chose not to use the initials for his first name in case we have more kids, I wanted them to be able to use it and not feel like it was only Sebastián’s busy board). I also added a regular light switch that does not have any lights attached to it (I figured he would enjoy clicking it off and on) a call bell, and some metal keys that are attached to a retractable key chain.

Below that I included a door stop, a door knocker, a little wood piece that is painted to look like a window and it is attached with a door hinge (it has a drawer handle and a dial combination lock). On the window I added the secret code with stickers, so he can try and open the lock himself once he gets older. For now, it is kept unlocked.

Below that row, there is an old fashioned phone and phone dial. The phone is held up by a drawer handle and there is a hole cut out in the bottom. The dial is inside a hole I drilled. Next to the phone there are two wooden pieces painted to look like a door. They have two little door knobs, a barrel bolt lock, and a gate hook and eye lock. There is also a magnifying glass. The magnifying glass used to be attached to a retractable key chain, but my son ended up removing it, so I attached it to a long retractable string instead. 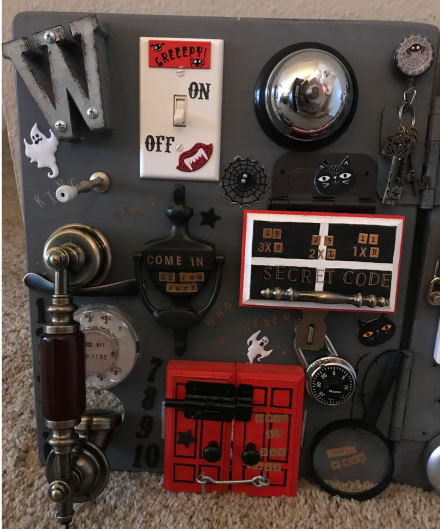 On the right side of the busy board I included another wooden door, that’s painted to look like a window. It has a mini door knob and a chain door lock. It is attached with a hinge. There is also a glass jar with fairy lights inside (I drilled a hole behind the jar so I could pull out the plug and connect the lights to the outlet receiver. I also made sure the lights were safe and not the type that become hot). There is also a metal D for the second part of his hyphenated last name.

In the second row there is the wireless light switch receiver, a little coffin that opens, and another window that is attached with a hinge. The little window has a dresser handle and a key lock.

The final row has a wireless stick-on tap light. Next to that is the key for the lock with a retractable key holder. There are two little doors attached with door hinges (they have door knobs and a gate hook and eye lock). Lastly, there is a cheap calculator.

Details inside the doors/windows:

Under the doors I added images. Inside the middle door on the right side that says “Unlock Me. Use the Key”, I added an image of kids trick or treating with letters that say “Candy!”. The little key that unlocks it also says key on the retractable key chain.

The coffin opens up and reveals a skeleton and a ghost.

Below the coffin, the two little doors that say “Tick Tock” show a pretend clock. I used washi tape as the base, then I attached stickers with numbers. It used to have the clock hands, but my son removed them, those need to be reattached and made to be sturdier so he can use it when he starts learning about time.

The door on the top right that says “Open Sesame” opens up to a surreal house with a bridge and hot air balloon. Above that it says “Dream Home.” 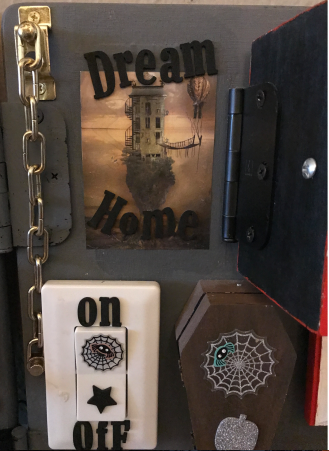 On the left side, inside the bottom door that says “Open if You Dare”, there is a plastic mirror and written over it, it says BOO. On the inside of the doors it also says, “Mirror, Mirror, on the Wall.”

The top door that has the secret code for the dial combination lock hides a secret forest with the words “Don’t go into the woods.”

When he removes the phone, it says, “Boo!” below the receiver.

Below where the magnet stands I wrote my son a secret message, it says “I love you. (Heart symbol) Mom”. 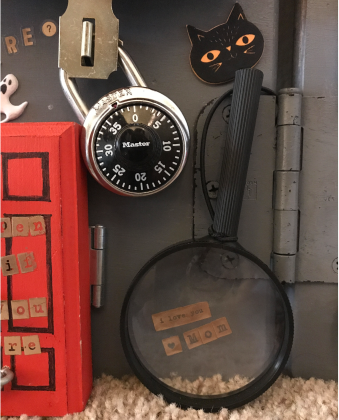 Here are some pictures of my son playing with his busy board from when he was only 8 months to 21 months (the age he is now). I think he enjoys playing with it more now, especially since he has figured out how to open some of the doors and windows. 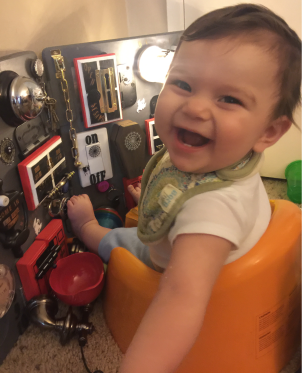 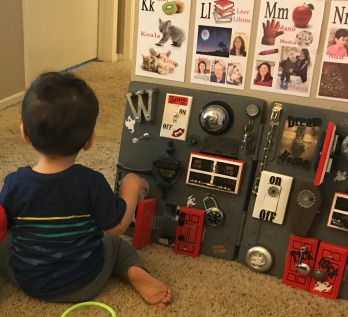 Below is another busy board that I worked on for my nephews. This was before I attached the pieces and added a lot of colorful stickers, plus a fanny pack to hold the magnets, and some images that I placed below the doors. I didn’t take the final pictures, so unfortunately I don’t have the final product to show.

All in all, it was pretty pricey to make the busy board (the cutting boards were the most expensive, especially because I used two of them for my son’s busy board. However, he loves playing with his personalized busy board and I know any future kids we have will also enjoy using it. There is nothing more gratifying than making something that my son loves playing with and that is educational too. 🙂